Daryl Lee Tupper, 66, died on Jan. 27, 2021, at Mercy Hospital in Council Bluffs. He was born on Dec. 27, 1954, to Donald and Carolyn (Pitt) Tupper, in Council Bluffs. He grew up in the Logan-Magnolia area and graduated from Logan-Magnolia High School in 1973. Daryl was a wrestler and placed sixth at the state wrestling tournament as a senior at 126 lbs. After graduation, Daryl worked for hog confinements in Woodbine, Magnolia and Schuyler, Neb. Daryl then became an over the road truck driver. In 1986, Daryl quit driving and began farming full time. Daryl and Becky were married on Apr. 2, 2018, after being together for 14 years.

Daryl was preceded in death by his parents; sister, Janet Ring; son-in-law, Jason Meyer; and brother-in-law, Terry Fairchild. He is survived by his wife, Becky Tupper of Logan; children, Carrie Meyer of Logan, Rex Tupper of Council Bluffs, Nicole Mason and John Sparks of Woodbine, Matt Mason of Missouri Valley, Mitchell Mason of Glenwood, Shannon Keeran Hughes and her husband Mike Hughes of Chicago, Ill. and Erin Keeran and his wife Jennie of Portland, Ore.; four grandchildren, Jared, Joel, Thomas and Destiny; sister, Peggy and her husband Keith Fagan of Logan; brother-in-law, Marvin Ring of Magnolia; parents-in-law, Bill and Judy Fairchild of Mondamin; brothers-in-law, Jim Fairchild and Shannon Pitt of Pisgah, Levi Hall and his wife Danielle of Glenwood and Tony Fairchild and his wife Mandy of Missouri Valley; and many other relatives and very special friends.

A funeral service was held on Saturday, Jan. 30, 2021, at the United Methodist Church in Logan. Pastor Patti Ford presided over the service. The recorded musical selections were “You Should Be Here” by Cole Swindell, “You Raise Me Up” by Josh Groban, “Dancing In The Sky” by Dani and Lizzy and “Drink A Beer” by Luke Bryan. The pallbearers were Mike Wohlers, Mike Stolz, Doug Pitt, Kenny Small, Ronnie McHugh, Mark Michael and John Clark. Daryl’s final resting place is at the Woodbine Cemetery.

Trees in the Willow Park neighborhood to be removed early

Modale is one step closer to rebuilding the sewer lagoon 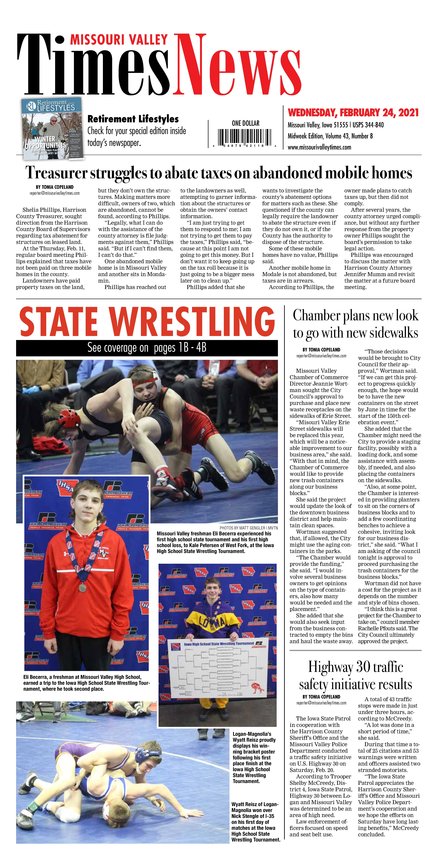