Harrison County Supervisors Meeting September 29, 2022 Chairman Walter Utman called the meeting to order with members John Straight and Tony Smith in attendance. Motion to approve the tentative agenda was made by Smith, second by Straight. Motion carried. Previous minutes were approved on a motion by Smith, second by Straight. Motion carried. Attendance: Deputy Auditor Elizabeth Lenz, Paul J. Rhoten, Brian Rife, Rebecca Wilkerson, Stephanie Blackford, Steven Struble, Renee King, Nick Loftus. Soldier Valley Drainage District Elizabeth Lenz, Drainage Clerk, presented the Board with a change order for the Soldier Valley 2019 FEMA project. Adjustments were made to as-built quantities, resulting in a decrease of $271,748.72. Unanimous approval was given to the change order on a motion by Smith, second by Straight. Payment of $199,221.29 to Midwest Mechanical Industrial Services LLC for the 2019 FEMA project was unanimously approved on a motion by Straight, second by Smith. Engineer County Engineer Steven Struble updated the Board on area projects. Canadian National Railroad Underpass Bridge on L-20 - The Canadian National Public Works manager notified Secondary Roads that they are planning to replace the superstructure of the overhead bridge over the top of L-20/Loess Hills Trail this December. Taylor #12 Bridge Replacement on F-50 over Allen Creek – Final project documentation will be prepared after the final required documentation is received from the contractor. 194th Street HMA Overlay, FM-CO43(91)—55--43 – The project is ready for final approval and final payment. Woodbine Pike Trail PCC Paving Including-----Feet of County Jurisdiction – The City of Woodbine has approached the county to ask them to share in the cost of paving Pike Trail. A portion of this road is also in the county. The cost for the county would be $97,177.00. Concerns were voiced regarding the fact that the road is already being paved and that it is mostly a city road. Mr. Struble felt that since it is a heavily traveled road, it warrants the benefit of the county paying a portion. The Board said they would like Mr. Struble to see what kind of agreement could be drawn up with the City as far as future maintenance of the entire road and they would then review and decide. Melody Oaks OttaSeal Surfacing Project – No start date from Midwest Coatings has been given yet. 220th & Parker Trail 12ft Diameter Structural Plate Pipe with Flume – Preparations are being made to set the pipe elbow and culvert at Parker Trail. Mr. Struble stated that he did not receive the required documentation to approve the Farm to Market payment for Sundquist Engineering and asked that it be placed on next week’s agenda. The Secondary Roads annual report was presented and discussed by the Board. John Straight reported a drop-off on Niles Trail that he thought warranted signs. Mr. Struble will investigate it. Public comments were heard by Renee King and Rebecca Wilkerson with no action taken. With business of the day completed, the Board adjourned on a motion by Straight, second by Smith. Motion carried. ATTEST: Elizabeth Lenz, Deputy Auditor Walter Utman, Chairman NOTE: These minutes are as recorded by the Clerk to the Board of Supervisors and are subject to Board approval at the next regular meeting. MVTN 10-5-22

Minutes of Regular Meeting Board of Directors The Missouri Valley Community School District Monday, November 14, 2022 Call to Order President Jeff Janssen called the meeting to order at 6:00 P.M. on … 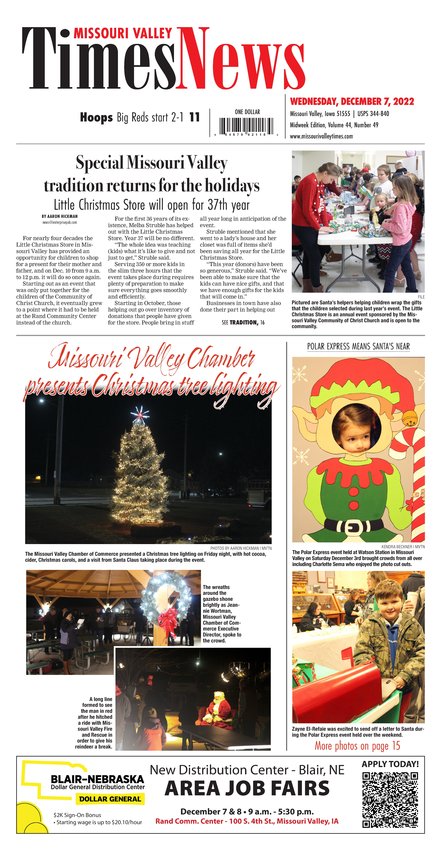