Pastor Howard Kelvin Mace was born, March 4, 1937, at Missouri Valley, the son of Howard Clarence Mace and Gertrude Fern (Powley) Mace. He graduated from Missouri Valley High School with the class of 1955. On June 5, 1956, he was united in marriage to Evelyn Irene Block in Missouri Valley.  Pastor Mace became a Moody Bible Institute graduate, while being an assistant Pastor in Los Angeles, California. He then went on to Pastor in Malvern, Lisbon, Wayland, Jesup and Independence. Howard also Pastored in Cozad, Neb., and Prairie Du Chien, Wisconsin. While Pastoring in Independence, Evelyn passed away from cancer in 1994. After Pastoring, Howard retired on May 15, 2016. He continued to fill pulpits for meetings and events until his death. Howard has enjoyed a lifetime of blessings and has touched many lives. His favorite Bible verse was John 3:16. "For God so loved the world, that he gave his only begotten Son, that whosoever believeth in Him should not perish, but have everlasting life."

Visitation was Thursday until service time at the church. Burial was held Friday, June 4, 2021, at Branson Cemetery in Loveland. Online condolences may be posted at www.White-MtHope.com

White Funeral Home, 1315 Main Street, Jesup, IA, was in charge of the arrangements.

Goodrich Music Studio prepares for its fourth production, The Sound of Music

Harrison County Board of Supervisors' meetings this week

Conference Board reappoints Loftus through 2027 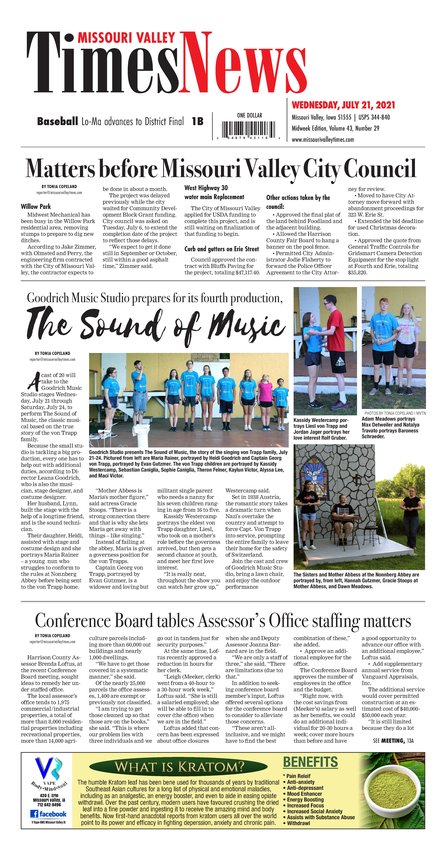