Jack Dale Bertelson, age 88, died Nov. 17, 2020, at his home with his wife, Eloise, at his side. He was born Nov. 28, 1931, at the family home in Willow Park in Missouri Valley, to Jim and Lily Bertelson. He was the first Bertelson male to reach 88 years of age. Jack attended Missouri Valley High School, during which time he played football, basketball, held the school record in pole vault for many years, and met the love of his life. He graduated in 1949, and married his high school sweetheart, Eloise Marie Kierscht, in 1951. The epitome of the American dream, Jack was a self-made man, becoming a successful businessman and farmer.  He was one of the first independent fertilizer dealers in the nation when he started Valley Fertilizer in 1953 and one of the last when he sold the business to Terra Corp in 1992. Active in the community he was a volunteer policeman, volunteer fireman and elected to the City Council as well as the Church Council for St. Paul Lutheran Church. He also served on the First National Bank Board of Directors (now Mid-States Bank) for many years. In 1960, the Jack Bertelson Family moved into their new home on Snyder Street which remains the center for family gatherings. Together they raised four children: Amy, Kim, Tammie, and Teresa and were instrumental in shaping the lives of their five grandchildren. In the 1970s and 80s, Jack and Eloise were involved in the sponsorship of bringing two families from Laos and Hungary to the United States. They feel fortunate to have heard from family members of both families within the past year. Jack loved the outdoors, as a hunter and fisherman, a golfer and tennis player and as an accomplished farmer. In 1978, he built a tennis court in the backyard of the family home and welcomed countless numbers of tennis players from the community. Jack also traveled extensively throughout the US and Asia, as well as to Mexico, the Caribbean, Canada, England, Scotland, Wales, and Slovakia with his wife Eloise. He spent time every summer with his large extended family at Bertelson Corner in Bemidji, Minn. They also spent over 20 years wintering in Surprise, Ariz. A well-respected man, Jack was always willing to help out. Devoted to his family, they could always count on him in whatever they chose to do. Although slowed by age in recent years, he was always physically active, helping someone with a project, teaching his grandchildren to fish and farm. Jack had a great love for babies.  He and Eloise spent over 20 years at the local high school in Surprise, Ariz. volunteering in the day care program for infants and toddlers, allowing teenage parents to earn their high school diploma. Additionally, Jack was always willing to babysit his grandchildren and the children and grandchildren of countless other friends and acquaintances. He embroidered blocks for more than 75 baby quilts that were given to nieces, nephews, and close friends. He enjoyed playing Santa for many years for friends, family, and occasionally strangers. Jack enjoyed people, he was always happy to see everyone and loved making people laugh.  He was a unique problem solver and would tackle any project around the house.

Jack was preceded in death by his parents, three sisters: Beverly June, Thordis, and Lucille, two brothers: Gene and Jerry, one nephew: Jimmy, a daughter-in-law: Jan, and countless close friends.

Visitation was held on Sunday, Nov. 22, 2020, at Hennessey Funeral Home in Missouri Valley.

A Celebration of Life Service was Monday, Nov. 23, 2020, at Hennessey Funeral Home in Missouri Valley. Dr. Glen Sherwood and Paster Jean McCartney officiated the service. The vocalists were Mike and Brit Liljedahl with Kris Gash as the organist. Vocal Selections were “The Old Rugged Cross”, “Wind Beneath my Wings” and “Jesus Loves the Little Children”. The honorary Casket Bearers were William (Pete) Cunard, Tom McIntosh, Noel Mumm, Auggie Munoz, and Don Johnson.

Logan businessman offers to share his services and his workspace

Tree trimming accident sent one to hospital via Life Net 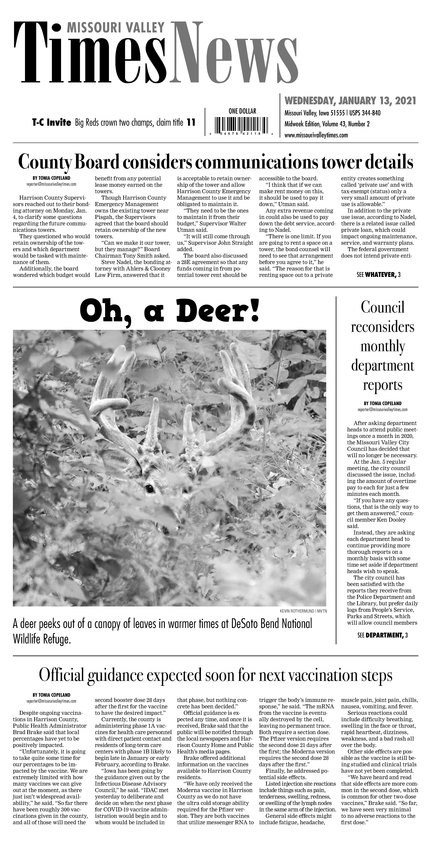